The 46th President of the United States, Joe Biden, has issued immigration changes on his inaugural day.  His transition organization issued a fact sheet laying out many executive orders to sign as he steps into the White House for the first time as U.S. President, including several immigration policies.  UPDATE 01/21/21: Those executive orders and actions are now in effect and their language can be found on the White House web page or this link.

Day-1 executive orders orders are commonly prepared and signed by all modern U.S. Presidents.  Some are meant to reinforce the new President's priorities, and some are to temporarily suspend the previous President's orders, especially prior agency regulations that have not yet been finalized and may be cancelled by the President/agency heads.

President Biden's inaugural schedule includes primarily ceremonial visits.  But once he arrives at his new abode for the next four years, he will step into the oval office and take his first official acts as president, about 5:15pm EST. 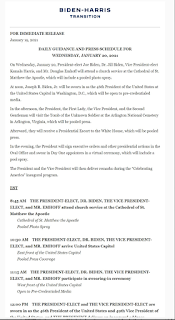 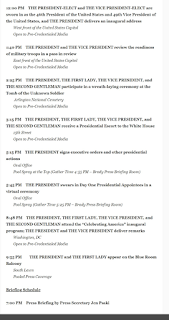 Many more immigration policy changes are expected in the following weeks, months, and years. The Day-1 immigration changes include the following:
• Reverse President Trump’s Executive Order Excluding Undocumented Immigrants from the Reapportionment Count
• Preserve and Fortify Protections for Dreamers
• Reverse the Muslim Ban
• Repeal of Trump Interior Enforcement Executive Order
• Stop Border Wall Construction
• Deferred Enforced Departure for Liberians
Some of these are self-explanatory.  For the Dreamers, immigration agencies have been directed in this order to propose details of a path to citizenship, either through agency rule or congressional act.  The Interior Enforcement Order repealed has a lot of content regarding prioritization of certain classes of deportations, as well as process that either expedited deportations directly or impeded/removed an individual's chance to defend against a removal action.  The Liberian DED expired in early January and required immediate redress.
I would be remiss not to mention that President Trump made some last minute changes to immigration. On the last day of his presidency he issued an order allowing Deferred Enforced Departure for Venezuelans in the U.S., which will provide much needed relief for those who fled the Maduro regime and that country's economic abyss.  However, the European travel ban was lifted this week, and a worldwide COVID testing requirement invoked for anyone entering the U.S., but the Biden administration may undo both of those.  There were also efforts to further restrict legal immigration processes such as the H1B visa.
As the weeks and months progress, I will report on additional changes. There will also be a lot to unpack from changes that have occurred.  It will be an exciting time with a flurry of activity.  I'm an looking forward to serving as a source of information and analysis.