You Do Have Choices In Your Immigration Destiny 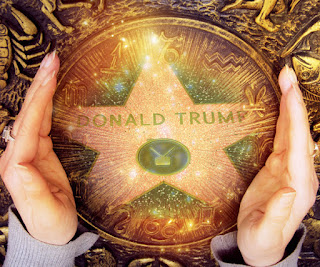 Last year the USCIS announced new scrutiny for third party IT consultancies.  As part of the priority given to combating fraud in employment-based immigration programs, USCIS issued a policy targeting site visits in certain sectors that commonly receive H1B visas and have shown more than average propensities for fraud and abuse.  These included circumstances where an employer's basic business information could not easily verified, employers with a high ratio of H1B workers, and--the topic of this post--employers who send their H1B workers off-site to work for another company (i.e. "IT consultants").

So then, almost a year later, what have been the results?  The answer is at the moment is hard to tell.  Today, the USCIS recycled their year-old announcement on Twitter, without amendment let alone report, on the success of their scrutiny.  See my Twitter response below, not that I think anything will come of it. 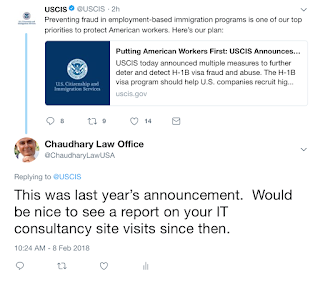 Recycling this old Tweet hints that not much has been done since the USCIS announced it will target site visits to IT consultancies.  Here's a couple of potential reasons:  First, and most likely, the new administration was reshuffling and had no real capacity for new initiatives beyond some initial saber rattling.  This is evidenced by President Trump's haphazard Executive Orders, agency confusion, and law suits overturning the "Muslim ban."  This is really the case with any new administration, so I'm not going to just too harshly.  Hopefully USCIS's targeted site visits of fraudulent consultancies have stepped up at least a bit.  But a stern, public warning is better than nothing I suppose.

A second reason not much has been done on H1B abuse in 2017 is that, according to some data, Requests for Evidence (RFEs) have increased 60% thereby reducing the need for site visits.  To me, RFE's represent only mild scrutiny and allows applicants the opportunity to prove up an applicant's case more.  It tells the applicants what is precisely on the mind of that particular adjudicator, and what documents are necessary to prove compliance.  As opposed to the heavy hand of an actual site visit, an RFE can be viewed as a somewhat productive communication amid an agency notorious for its unhelpfulness.  Here's some other reasons I like RFE's: I Likey RFE.

Has the USCIS then failed its promise to uncover H1B abuses, or failed its ability to address fraud, notwithstanding the no-doubt sincere finger wagging from a year ago?  Time will tell, of course, and so far we've only seen H1B denial numbers as recent as the first two months of FY 18, which is still within the Obama era.  For what it's worth, denials rose only a little during that time, according to some sources, from 10% to 15%.  See the source of my info here: H1B's Under Trump Harder to Get.

But as yet there's no data provided on H1B denials since President Trump took office.  Which is strange.  For an administration bragging about putting Americans to work, you'd think we'd here more from President Trump and the USCIS about uprooting all the H1B abuses, along with the clearly intentional (and political) huff-n-puff about deportations, border wall, and travel bans.  There has been a marked uptick in ICE raids and detentions at courthouses.  So we know devoting field resources is not above Homeland Security, even in the first 12 months of the administration.

So I have to say, for the record, I don't yet agree that H1B's under Trump are harder to get.  Why? Just take a look at this brazen Facebook post by an IT consultant recruiter openly admitting to fraudulent H1B filings.  Do you think he's considered for one moment about what President Trump might do? 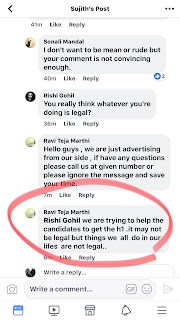 So then what of this?

Well, despite USCIS's so far flacid approach to H1B abuse, all H1B visa stakeholders, especially IT consultancies, should take the threat of increased site visits seriously.  And those who should take the threat of enforcement most seriously should be the foreign nationals who receive the actual visa.  I've seen first hand foreign students, and even current H1B visa holders, jump long chasms for the false promises of shady IT "body shops."  They fool themselves that if the company claims visa compliance then they are protected.  Many of these noncitizens are so desperate to anchor a claim in America they'll believe anything despite blaring warnings from the government and other legal authorities.  They'll look online for any discussion forum that validates an emotional belief that what they're doing is legal, and scroll right pass true authority that tells them otherwise.

Many are pressured by their families back home who see dollar signs that can invest in India's real property boom, for example.  It's sad, because who loses in the end?  The IT worker.  After all, there is no excuse for noncompliance with the law, especially since so much correct information is available.  An IT worker, above all people, should be able to find the answer online!

Thus in the end the denied H1B hurts the foreign national harder, not the business.  The body shop simply petitions for another worker, and the foreign national is left with few if any options.  Often, when denied the noncitizen is fooled into more potentially fraudulent activity, like jumping to the so-called "Day 1 CPT."  Do they really think the company, and their "immigration team" (the bon mot for not having a lawyer), cares what happens to the beneficiary?  Most of all, these abuses hurt prospects for future workers who are compliant with the law.  Talk about slaying the goose with the golden egg!

You don't need to jump a wall to be an illegal alien.  If your documents are attained by cutting corners and bogus client letters, for example, your legal status was arrived at fraudulently.  If this is you, feel free to deny it all day.  But:

And by gum it doesn't have to be that way!  There are so many IT jobs it's not even funny.  There's almost zero unemployment in IT!  You can get a legitimate H1B visa if you follow the right steps, ask qualified people, and remain a tad patient.  But, like in so many immigrant communities, many IT workers are fooled by the snake oil salesman who promise immediate work to get that quick buck from noncitizens who are educated enough to easily check their delusions in favor of simple inquiry with someone qualified, not just some stranger on the internet, but don't!

And God knows why, because many of these job "promisers" aren't even in America!  See this particular advertisement, blatantly promoting their "notario" services: 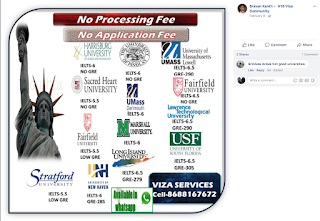 Now, just set aside the unauthorized practice of law problem for a moment.  Stratford University? Really?  The USCIS has, for the last several years, denied every single application based on a degree from Stratford and others like because they are for-profit!  Your life and career and family are on the line--WHY ARE YOU ENTRUSTING IT TO FACEBOOK!!

The above accreditation issue doesn't even address the problem of faulty curriculum.  See below. I have NO idea what this guy is doing.  He says he provides an actual college curriculum that is compliant with an F1 visa, and then he actually issues an I-20 (only college DSO's issue I-20's),  ALL FROM INDIA! 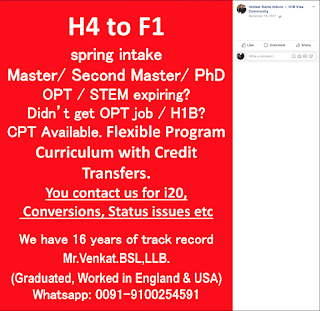 And I couldn't help my curiosity with this next one.  If you know what a conditional or unconditional I-20 is, I'm all ears.  There is such thing as conditional admission, but you can't receive an I-20 until you're cleared to attend classes, meaning you've met all conditions.  Apparently he's promising to get around some requirements, and meet all the remaining University admission requirements for you.  Good luck with your PERM audit when this degree is reviewed! 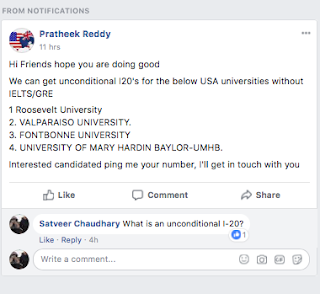 I can say with certainty the next "Tri-Valley University (TVU)" raid is just around the corner.  My prediction is that it will be on the issue of "Day 1 CPT."  But it could regard any of the previous issues I've discussed.

Ugh.  Okay you're getting my point.  But in case I've buried the lead a little here's the recap:

1) Trump has not been addressing H1B abuses yet, in fact the abuses may be getting more blatant under Trump.
2) If you participate in H1B fraud, abuse, or even corner-cutting, you will get caught now or down the road with a denial at minimum.  It's the worker and their family who suffers.  DON'T LET IT BE YOU!